Bangkok, Thailand’s capital, is a sprawling metropolis known for its ornate shrines and vibrant street life. The boat-filled Chao Phraya River feeds its network of canals, flowing past the Rattanakosin royal district, home to the opulent Grand Palace and its sacred Emerald Buddha temple. Nearby is Wat Pho with its enormous reclining Buddha and, on the opposite shore, Wat Arun with its steep steps and Khmer-style spire 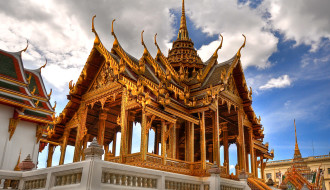 The Grand Palace is a complex of buildings at the heart of Bangkok, Thailand. The palace has been the official residence of the Kings of Siam since 1782.

For just about 150 years, Bangkok’s Grand Palace was not only the home of the King and his court, but also the entire administrative seat of government. Within the crenelated walls were the country’s war ministry, state departments, and even the mint. Thai Kings stopped living in the palace full time around the turn of the twentieth century, but the complex remains the seat of power and spiritual heart of the Thai kingdom. 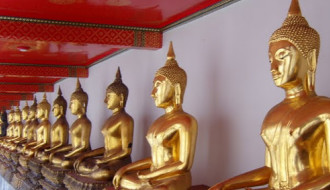 The Grand Palace is divided into three main zones: The Outer Court, home to royal offices, public buildings and the Temple of Emerald Buddha; the Middle Court, which is where the most important residential and state buildings are; and the Inner Court, which is exclusively reserved for the king, his queen and his consorts.

The major attraction of the Outer Court is the Temple of Emerald Buddha, the residence of Thailand’s most sacred Buddhist sculpture: Phra Kaeo Morakot (the Emerald Buddha), which was carved from flawless green jade, situated amid gold-gilded sculptures and ornaments, and fresco paintings of the main ordination hall.

Situated at the center of the Middle Court is Chakri Mahaprasat Throne Hall which was ordered by King Rama V to become his residence and a major throne hall. The construction began in 1876 and completed in 1882, revealing an outstanding architectural-style combining European structure and traditional Thai roof tiles and spires. The interior sees sophisticated decorations inspired by European renaissance era, adorned with royal portraits of Chakri Dynasty’s monarchs. The building now only serves state functions and royal ceremonies.

At the far right of the Middle Court is Borom Phiman Mansion, which was also constructed during the reign of King Rama V in neo-renaissance style to become the residence of the crown prince. This most modern architecture within the Grand Palace compound later became the occasional residence of three succeeding kings. The mansion is not open to public and currently served as the official accommodation for visiting heads of state. Borom Phiman Mansion is part of Sivalai Garden complex, where the office of the Royal Household Bureau is. The garden was a recreation area for the royal women and children and is now used for receptions.

Sat between Sivalai Garden and Chakri Mahaprasat Throne Hall is Maha Monthien Prasat complex, home to the Audience Hall of Amarin Winitchai where royal ceremonies usually take place. While on the far left is Dusit Mahaprasat Thone Hall, which is an ideal archetype of traditional Thai architecture.

Getting there: One of the easiest, and most pleasurable, ways is taking the BTS skytrain to Saphan Taksin station, located atop Sathorn “Central” Pier. From here, take a Chao Phraya River Express boat to Chang Pier, and then it’s a short walk to the Grand Palace’s main entrance.

Opening hours: Open daily from 8:30am to 3:30pm except during special royal ceremonies.

Dress code: Visitors are required to dress appropriately. These following clothes are strictly not allowed as outer garments for both ladies and gentlemen:

Designed and built by Marketing Can